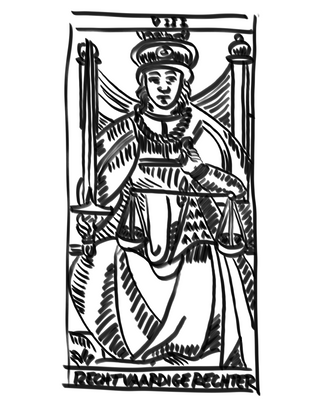 Why is it a woman? Because here, justice is receptive, she is listening, she is weighing. Surprisingly justice isn't represented in the tarot as active, but passive.

In this age of superhero movies where justice is taken into the hands of extremely physically strong fighters this seems counterintuitive, yet...

In the tarot we see something else than the superhero:
So what else is the card trying to tell us?

The scales move according to what is. Put an apple in the one scale, then it will go down as the other goes up. When you put an apple in the other scale, the scales will balance once again. Does it matter to whom
the apples belong? Who puts which apple in what scale? Does is matter what color the apple is, what tree it comes from? The fact is the fact:
the scales will balance if there's an apple in each scale. There's a certainty to knowing this fact. It puts you at ease.

None of it takes away from the fact that...
the scales will balance once you put equal weight in each scale.

And that's exactly what the sword stands for.
It's not the sword of rules and regulations as punishment or revenge for stuff that has happened.
It is the sword that cuts you free of attachment
to outcome. If you need someone to admit to guilt, or for them to be punished before you can move on - you are imprisoning yourself as much as you are hoping the other to be.

The sword is your steely resolve that says: the scales will balance. Have faith. It is so. Allowing you to move on, to be free.